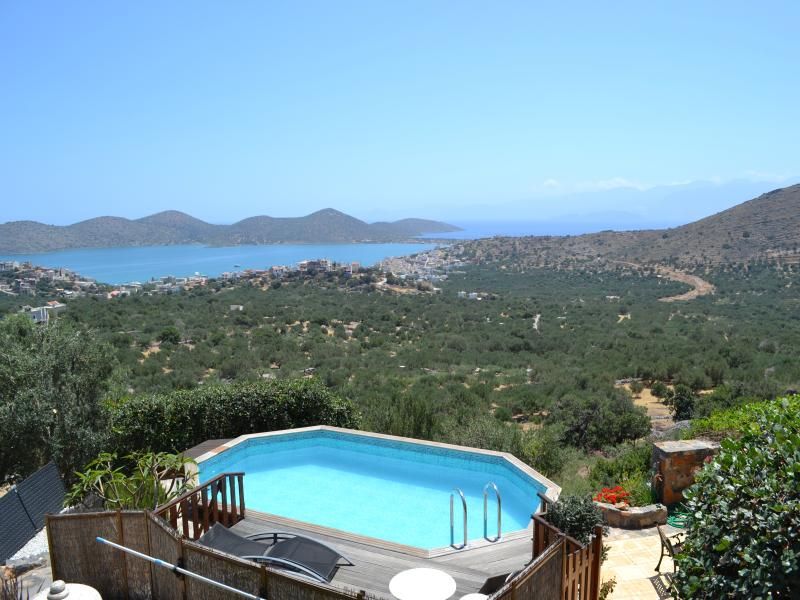 A very private villa built in fenced land of 3000sq meters near (within walking distance) the traditional village of Epano Elounda. The property is on the side of a hill and enjoys great views of the Elounda bay.

The property has a new tourist rental license (EOT), which means it can be rented out as a holiday accommodation, offering the possibility of a good income.

A remote controlled gate allows access to the property. The concrete surface in front of the house has enough space to park a few cars and there is also a garage (with a remote controlled door). This serves as one of the main entrances to the house.

An independent one bedroom apartment is on this floor. It comprises a large double bedroom, a kitchenette and a bathroom.
A marble staircase leads up to the first floor. On this floor there is a large fitted kitchen with wooden wardrobes and a dinning area, a large balcony that also has access to the ground terrace, a double bedroom with fitted wardrobes, an office and a bathroom.

On the second floor there is a beautiful lounge area with access to a big balcony overlooking Elounda, Pano Elounda and the sea, a double bedroom and a large bathroom with a vanity shower.

The land surrounding the house is landscaped and features an olive grove, a swimming pool with a sunbathing terrace, a good-sized jacuzzi, flower gardens and stone paved paths.

The seaside resort of Elounda and many sandy beaches are within a few minutes drive. Agios Nikolaos (the province capital) is about a ten minute drive and the international airport of Heraklion is an hours drive from Epano Elounda.

Elounda is a small fishing town on the Mirabello, on the island of Crete, Greece. It is part of the municipality Agios Nikolaos. It is popular with European tourists and has several 5*hotels. Elounda is also the closest major town to the former leper colony of Spinalonga. The town is near to the city of Agios Nikolaos and the village of Plaka (Lasithi).

Agios Nikolaos is the capital of the county Lasithi and is located at the Mirabello Bay, north-east Crete, only 45 mins away from the international airport of Heraklion.

Geographically the town is well protected from strong winds allowing sea sports and swimming nearly all year round.

Although Agios Nikolaos has a population of less than 20,000 it has a several banks, supermarkets, shops of every kind, doctors, a modern hospital of high standard, public swimming pool and tennis courts, yacht marina, harbour, cinema, theatre, gyms, a 9-hole golf course, schools ranging from nurseries to 6-level high school and generally all the amenities you would expect to find in a modern European town.

The microclimate is one of the best in Greece and the moderate temperatures rarely exceed 30c in summer or fall below 15c in wintertime. This wonderful dry climate together with the natural beauty of the area has attracted most of the high class hotels of Greece to operate here.

This is a two storey house in the area of…

This large seafront plot with a shoreline of 540 meters, suitable…

This lovely, 3 bedroom villa is set on a hill…

Large seaside building plot, located in Vlichadia, at the north…

Contemporary modern style villa, located in one of the most…

This brand new modern villa designed by Diego Tobal has…

Owning a home is a keystone of wealth… both financial affluence and emotional security.

Compare
You can only compare 4 properties, any new property added will replace the first one from the comparison.